Why Vitamin A scores an “A” Grade! 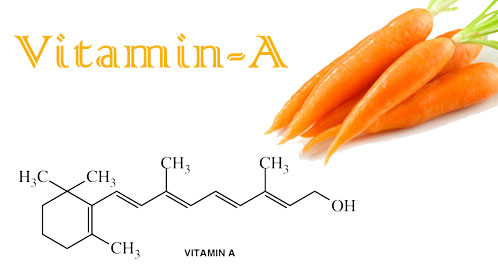 The Importance of Vitamin A

Since ancient times mankind has tried to make cosmetics to improve the skin and more importantly hide the effects of ageing. The bitter truth is that for the most part, “cosmetic creams” remained simple, old fashioned only offering dreams of Youthful Skin wrapped up in progressively more modern and expensive containers! So how has this situation changed today? Well to put is simply with the introduction of the scientifically proven agent…. VITAMIN A! 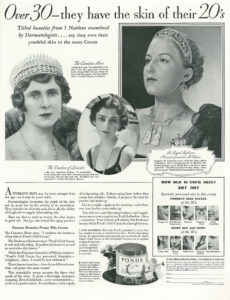 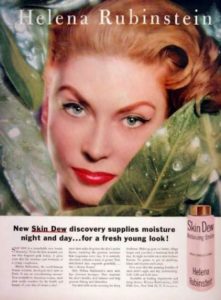 We have known about the importance of vitamin A and how it is essential for healthy normal skin since 1911, and since beautiful skin is healthy skin then shouldn’t our skins be rich in Vitamin A? The uniformed will tell you that you can get all the vitamin A you need from your diet, but what those people don’t know is that even as long as the 1950’s, a Professor Cluver proved that every time we go into the sunlight we significantly deplete our Vitamin A, in our skin as well as in our blood! This doesn’t mean is has to be super-hot beach day kind of sunlight, this is true for the gentle UV-A radiation on a rainy and cloudy day, however the effects are milder. Along with vitamin A, vitamins C, E and beta-carotene which are normally found in the skin are also destroyed by the UV-A rays. 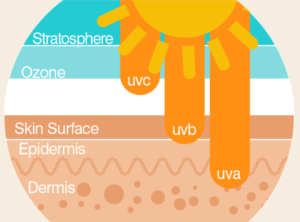 So, what is Vitamin A?

Let’s delve into a bit of the chemistry of vitamin A so we can gain an understanding of why it’s so important! Vitamin A belongs to a family of organic chemicals called Retinoids. There are a few forms of vitamin A but they all essentially have the same action.

There is another form of Vitamin A that is important- 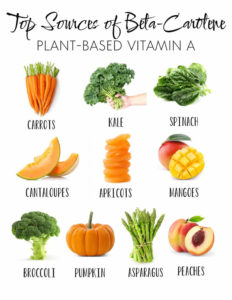 Antioxidants? Why are these so important?

Free radicals are out “Invisible Destroyers”, they are unstable atoms that damage cells.  When oxygen molecules split into single atoms that have unpaired electrons, they become unstable free radicals that seek other atoms or molecules to bond to. If this continues to happen, it begins a process called oxidative stress. 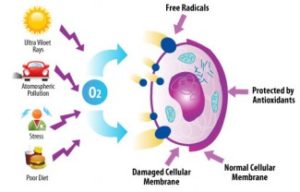 can damage the body’s cells, leading to a range of diseases and causes symptoms of aging, such as wrinkles. UV is the most common cause of oxidative stress, along with Alcohol and smoking. We also have Lipid Peroxidation which put simply, is compounded and untreated intracellular form of oxidative stress. This includes the cell membrane and loss of oil soluble antioxidants and will lead to more serious cellular damage such as a mitochondria DNA damage of a cell. The purpose of antioxidants is to bind to these destroyers and neutralise their effects, so they are important when we think about skin health and anti-ageing. Beta Carotene, the plant-based Vitamin A is the most powerful antioxidant.

The Vitamin A Story:

Vitamin A had a complicated and bumpy start to its story due to the tremendous media hype given to Retinoic Acid which almost became a household word as the “wonder anti-ageing” cream. Retinoic acid first manufactured in 1947 proved its value in the treatment of sun-damage by Dr Stuttgen and later Dr Kligman showed its advantages in acneic skin. He later noticed that the middle age acne patients began to comment their complexions were smoother after the use of Retin-A for a few months.  Many people then tried to use Retinoic Acid however they often found it irritating to the skin, skins became flaky, red and tender. People felt that the retinoic acid was thinning and damaging the skin rather than feeding and restoring it. Simply put, the irritation produced by Retinoic Acid is very similar to overdose of Vitamin A, the skin is so unused to Vitamin A that the normal metabolic pathways have become inactive, so when Vitamin A is put on the skin it seems so excessive even though it means the complete opposite, their skin is so in need of Vitamin A.

Vitamin A should be given to the skin in small doses, which gradually increase until the skin can tolerate a normal dose of Vitamin A without any reactions. Without exception, even the most sensitive skin can be acclimated to the full strength of Vitamin A. 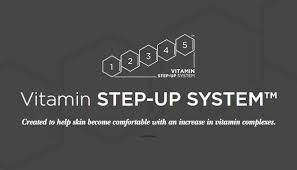 So now, what does Vitamin A actually do?

Prolonged and continuous use is essential and in more than 80% of cases some changes in the skin will be obvious with as little as 4 months use. The pigmented marks will take longer to fade and may not disappear completely without the use of specific pigmentation products. The best results are seen around the eye area but even the very difficult lines on the upper lip can be dramatically improved, it is also suggested that Alpha-Hyroxy Acids are used as the Vitamin A is more easily accepted into the skin and better results are achieved with the combination then alone. 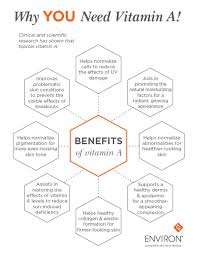 How do we use Vitamin A?

Over consumption of Vitamin A can cause liver damage and skin problems. The safest way to supply Vitamin A is to apply it directly. Vitamin A should be introduced in its weakest form and then gradually increased to acclimates the skin to its effects until the maximum dosage is easily accepted by the skin. We know from research that Vitamin A is absorbed into the skin and all the Vitamin A applied stays in the skin and dermis, studies have not yet detected any absorption into the blood.

Vitamin A are all very active chemicals and are easily degraded by exposure to light, heat, air and moisture. Therefore, when they are used in any cosmetics they should be made under very controlled circumstances and the formulations must have carefully thought out containers that protects their integrity. Genuine Vitamin A  cosmeceuticals are not packaged in cosmetic jars with a widely opening lid where air and light will denature the Vitamin A, but rather in tubes that protect the important Vitamin for light, no air is sucked back into the tube and the product maintains its integrity. 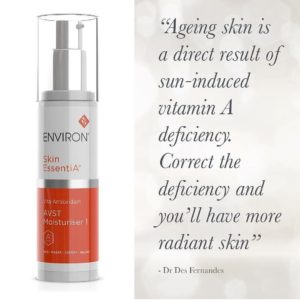 Vitamin A has been proved to be essential for the skin. In this day in age, with environmental degradation, where the sun is becoming more dangerous to our skin, the use of Vitamin A for the daily protection has become mandatory. With all its benefits why wouldn’t you want to use this A-mazing Vitamin. Go slow and introduce Vitamin A into your daily skincare with either of the ranges we stock at Puravida and see why we have a love affair with Vitamin A!